The differences between off road and rally are well publicised, and it’s something Glenn Brinkman is slowly figuring out for himself.

Locked in to make his official BFGoodrich Motorsport Australia Off Road Championship (AORC) debut at next month’s Cobb & Co Hotel St George 399, Brinkman is a driver who is competent behind any wheel.

Already a fierce and well-respected competitor in the Queensland and New South Wales rally scene, Brinkman will juggle both disciplines in 2021 as he looks to tick the Tatts Finke Desert Race off his bucket list.

And Brinkman isn’t the only rally driver to recently cross over either with four-time RSEA Safety Motorsport Australia Rally Champion (ARC) Simon Evans having run a SXS Turbo since 2018, while 2016 ARC champion Molly Taylor will contend the inaugural Extreme E Championship later this year.

Although still a student of the sport, Brinkman believes there are multiple reasons he was attracted to off road.

“Put simply, Finke was on my bucket list, so I thought I would do St George as preparation,” Brinkman said.

“I don’t know too much about the AORC now.  I know who some of the big names are and some of the crews I have met along the way doing short courses, but outside of that, I am still learning about the sport – especially what the flags mean.

“The one thing I have learnt quickly though is that off road is about circulating. There are some people who are super quick, but they seem to have issues here and there, which separates different contenders.

“Reliability is the key to a good result I think. I wouldn’t say slow and steady wins the race, but you can bag good results if you don’t have drama, which in itself is difficult as the courses are challenging.”

Despite still being green in the discipline, Brinkman has certainly fast tracked his development.

On top of a few short course events every so often, Brinkman’s big test came at last year’s St George Dam Buster 250, and he passed with flying colours as he secured a respectable top 10 finish.

Now with the AORC season opener less than a month away, Brinkman is getting excited for his official debut in a new chapter.

“The Dam Buster was a good experience as my first real off road race. I competed in Bruce Garland’s old D-Max for Dakar, but I have since found a little old school trophy truck, which I am hoping to have by St George,” Brinkman added.

“I just can’t wait for my debut. I am 100 per cent going to be there, but it just depends on which car I go in because I am still trying to get the Trophy Truck finished.

“I feel I am pretty well equipped to compete. Last year in my first ever visit to St George, it was a bit daunting around the dam walls and because I didn’t know how to land. Now I know what to expect, which is a big difference.

“I haven’t really looked at a full AORC campaign because it conflicts with my rally program, but I will certainly do the first two rounds, and potentially Loveday too, unless I find myself in the title race– but I don’t think I will. 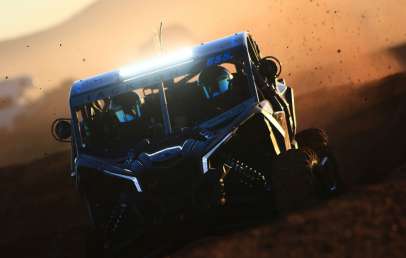