Less than 50 days remain until the BFGoodrich CAMS Australian Off Road Championship’s season finale in Rainbow with event organisers gearing up for their biggest event to date.

Entries for the are now open and will remain open until Friday 29 July, with early bird entires closing on 19 July.
Click here to enter.

Competitors will be able to enter the event via the CAMS member portal or the event website and will remain open for another month.

Hosted by the Victorian Off Road Racing Association (VORRA), the Hindmarsh Shire Rainbow Desert Enduro is considered one of the toughest events in Australian off road due to the brutal conditions.

With the Enduro reaching its third year, VORRA president Tony Carabott was thrilled with some of the recent changes made to the event, with the town showing its support.

“The town is right behind it and working bees have already commenced so there is a lot that has gone on in the background to get it to where it is now.

“There will be a slightly different starting formation this year, it’s going to start in the infield as opposed to the outfield in previous years, which should make things interesting.” Like last year, competitors will be competing seven laps of the endurance laps and with rain affecting the course in the previous two years, Carabott enjoys the event’s tough perception.

“Competitors are starting to believe it is as tough as Finke because it’s a real endurance event.” Carabott

“It’s a unique place and it’s a unique track because it has a variety of different terrain.

“At this stage, we have had a lot of good feedback, we will probably be looking at about 60 crews competing and anything above that is a bonus.

“Obviously it is the finale as well which adds even more to it, especially now that there is not much in it between the top drivers. It’s anybody’s game and it’s definitely not a one horse race.”

Reigning champion Shannon Rentsch currently leads the Championship after winning the St George 399 in April and finishing fifth at the Tatts Finke Desert Race, while Mark Burrows just 36 points behind after finishing second and fourth respectively. 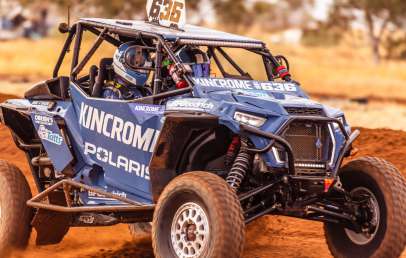