Toby Price will be first on the road to Finke on Sunday morning, setting the fastest time in the Method Race Wheels Prologue just 0.2s ahead of Josh Howells.

Price’s time of 4:42.9 saw him eclipse Howells by the smallest of margins across the 8km prologue track for the Tatts Finke Desert Race.

Third outright was Aaron James, while Beau Robinson ended the morning in fourth in his new Geiser Trophy Truck. Rounding out the top five was Glenn Owen. The starting order for the iconic round as part of the BFGoodrich Motorsport Australia Off Road Championship is now set, with Price to lead off the field at 7.30am on Sunday morning.

In the KINCROME SXS Motorsport Australia Championship, Peter Carr was fastest in his Can-Am, the best of all SXS entrants and 21stoutright. Thomas Swinglehurst was the second quickest SXS, while Jeff McNiven made a strong return to the Championship ending Saturday’s action third in class.

With SXS Sport also in action, John Wisse was fastest in class, while Matthew Lavis took second and Rick Chambers in third.

Of all the Extreme 2WD entrants, Price was fastest, Robinson second and Toby Whateley third.

In the highly competitive Pro-buggy class, it was Howells quickest ahead of James and Owen. In a somewhat surprise result, AORC Championship leader Ryan Taylor ended the day sixth in class and 12th overall with some work to do on Sunday. In Sportslite, Steven Graham finished ahead of Rodney Visser and Sam Bentley. Finke full in a day 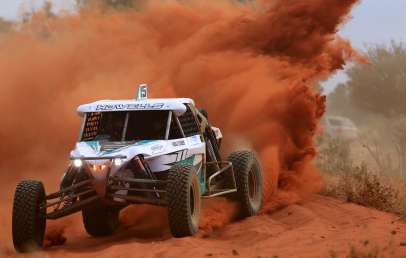