The first section of the Cobb & Co Hotel St George 399 has been completed, with the reigning winners Josh Howells and Eric Hume leading the way.

Having secured a clear pathway thanks to winning Saturday morning’s Top 10 Shootout, Howells led from start to finish to complete the first laps in just over one hour and 39 minutes.

Despite leading the way after the first section, it was not clean run for the New South Welshman, who sustained some damage throughout the two laps and lost one of his shocks.

“It was a good result. Tried to get into our groove and we’re happy to still be in the lead,” Howells said.

“We had problems when we came out of the tree sections, and cleaned up one on the left hand side. Was hoping we wouldn’t lose brakes. The pedal stayed there, which was great. We noticed oil coming out – drove the rest of the race with no left shock, which was interesting through the trees.

“Don’t think it will slow us up tomorrow, hopefully we will get it fixed and we will be back on track. Finishing in second place behind Howells was Friday evening’s Prologue winners Beau Robinson and Shane Hutt, after the duo produced a brilliant stint during the opening section.

It was a difficult start to Saturday for the West Australian, who had motor issues during the Top 10 Shootout and was unable to post a time – forcing him to start from 10th.

Fortunately, his team was able to get the Geiser Brothers Trophy Truck back on all eight cylinders, and Robinson enjoyed a drama-free run to post a time just 40 seconds adrift from the leading Pro Buggy of Howells.

“It was another good day even though it didn’t start off this way, it’s a shame we didn’t get clean air early, got lost a few times but to be second is really good and we will see how we go and if we can keep it up, it will be an interesting weekend,” Robinson said.

“We thought we lunged the motor in the Top 10 Shootout, but luckily none of the parts had gone through the engine, we just put it all together with parts from a rebuild, so it’s all good.

“You would think with all the trees, it would be buggy territory, but based on the times, we’re doing well.”

A further minute off Robinson was Ryan Taylor and Kye Floyd, who continued to impress in their Pro Buggy after scraping into the top 10 in Prologue yesterday, and posting a top five time in the shootout.

With Matt Hanson withdrawing after the shootout, and Toby Whateley having issues in the section, Taylor managed to start second for the first section before dropping to third behind Robinson. Shannon and lan Rentsch enjoyed a solid return to the BFGoodrich Motorsport Australia Off Road Championship with fourth place in the section, while Greg Gartner and Jamie Jennings rounded out the top five.

Just outside the top five was the fastest Prolite driver in Michael Spokes and Brad Rogan, who comfortably finished in sixth and more than four minutes ahead of the next best ranked prolite crew in Ally Howells and Sarah Corrigan. Splitting the two was another pro buggy, piloted by Jake and Kate Swinglehurst.

In ninth place was the fastest KINCROME SXS Motorsport Australia Championship crew in Jake and Kevin Williams, while veteran SXS driver Phil Lovett and Luke Stanley rounded out the top 10.

The Williams crew started the event in 14th, but with a number of SXS crews ahead of them suffering mechanical dramas across the two laps, the Williams duo managed to place their buggy in eighth outright.

“We’re feeling really good, definitely didn’t expect it after that session. We were kind of clean and had a few off moments, but we’ll take being where we are,” Williams said.

“We definitely capitalised on a few of the other SXS guys early, we also passed Jackson Evans after being in dust but once we passed him, we got clean air and just slowly put in some laps even though we had some misfortunes of our own.”

The action resumes on Sunday with all AORC and SXS crews to complete another three laps from 7:30am AEST. 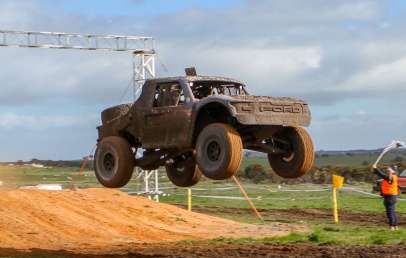