The BFGoodrich Motorsport Australia Off Road Championship (AORC) will welcome a new event to its calendar next year, the Gold City 450.

Organised by the North Queensland Off Road Association, the new event will be based out of the club’s home location in Charters Towers and will act as the AORC’s sole visit to Queensland for the 2023 season and beyond.

While an exact date for the event is yet to be confirmed, the format will stick to the traditional off road two-day style with Prologue and the first of three sections to take place on the Saturday, while the remaining two sections will run on the Sunday.

Charters Towers will be the fourth newest addition to the AORC since 2020, with the brand new Coomealla Memorial Club and Bendigo Bank Pooncarie Desert Dash having already run this year, while the Can-Am Loveday 400 and Kalgoorlie Desert Race will finally get their national debuts later this year, having been announced in 2019.

Motorsport Australia Director of Motorsport & Commercial Operations Michael Smith was pleased to welcome the event to the AORC.

“We’re excited to welcome Charters Towers to the AORC and we are looking forward to this newest chapter in the ever evolving journey of the championship,” Smith said.

“As such, Charters Towers will be the only round to take place in Queensland next year, meaning that unfortunately the Cobb & Co Hotel St George 399 will no longer be on the calendar.

“I would like to sincerely thank the South East Queensland Off Road Racing Association for its hard work and dedication in running what has been a great event since joining the AORC calendar in 2017.

“As for Charters Towers, the team at the North Queensland Off Road Association has plenty of experience in running successful events and have instilled plenty of confidence in us that they will do a wonderful job in representing the national championship.

“We have already seen how positive the inclusion of a new event can be with Pooncarie exceeding the expectations of crews this year, and I have no doubt that Charters Towers will do the same next year.”

North Queensland Off Road Association Treasurer Don Young was excited to have the AORC heading to Charters Towers in 2023.

“We are absolutely honoured to be able to host a round of the AORC in 2023 and this is a fantastic result for our club,” Young added.

“A big thank you must go out to Motorsport Australia and the AORC for having faith in us to run a successful event and we will work hard to make it one worthy of being a national round.

“Hosting a national round next year will be a first for the North Queensland area and our team are confident the best crews in Australia will enjoy it.

“We have already received lots of support from the Charters Towers Council, who are really getting behind the initiative and we are excited for what it will do for the region.”

More details on the Gold City 450 in Charters Towers will be released in the coming weeks.

The 2022 BFGoodrich Motorsport Australia Off Road Championship resumes later this month with the Can-Am Loveday 400 at Loveday 4×4 Adventure Park on 29-31 July. 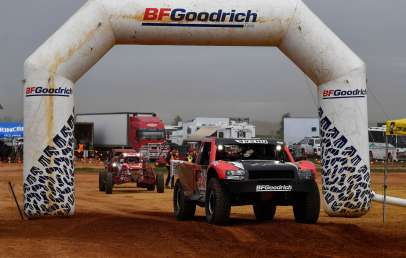