Showing the same pace they did at the Cobb & Co Hotel St George 399 earlier this year, the New South Welshman and his navigator Eric Hume crossed the finish line behind only international star Toby Price – who finally won the event on his fourth attempt.

The iconic race was Price’s first event for the year – his victory propelling the Queenslander to seventh on the standings, while his navigators Mark Dutton and Josh Weining shared the points after spending a day each in the passenger seat.

Greg Gartner’s hopes of securing a maiden AORC title took a hit after a tough weekend in Alice Springs. Heading into the round in second place, the Trophy Truck pilot had major issues and finished P11.

With Beau Robinson rounding out the Finke Podium, the West Australian leapfrogged Gartner into second place on the outright standings and with a two-point gap. Howells now holds an impressive eight-point advantage over Robinson, putting him in a commanding position ahead of the Can-Am Loveday 400 later next month.

Rounding out the top five are first-year driver Paul Weel and Pro-buggy star Talbot Cox, while another two Queenslanders in Brett Comiskey and Price himself are in contention for a top five position.

The next highest placed Pro Lite drivers are Michael Spokes and Jason Richards. Both drivers sit just outside the top 10 but have their St George performances to thank after Spokes missed Finke and Richards’ ongoing engine issues forced a DNF.

The Tatts Finke Desert Race proved difficult for the SXS Turb buggies and Kye Floyd’s top 20 finish in the Northern Territory saw him move to the highest ranked driver for the class in 16th.

Jeff McNiven was on par to score the most points for the class, only for his SXS to clonk out right before the finish line, forcing the Queenslander to push the buggy over the line to 38th outright. A top 30 finish to Dean Meginley saw him retain the record of being the highest placed Sports Lite driver in P24 – just one place ahead of Extreme 2WD pilot Brent Smoothy who made up 32 places thanks to his 14th outright in the second round.

As for the Co-Drivers’ championship, Hume comfortably sits on top of the standings by 14 points over Weel’s partner in Andrew Reid as a result of Robinson’s regular co-driver in Shane Hutt missing Finke. Jamie Jennings in the Greg Gartner Trophy Truck is in third.

With two rounds now complete, 58 of the 170 plus drivers have managed to score Championship points, while a further 11 individuals have scored co-driver points.

Class points will be confirmed in the coming week.

The next round of the 2021 BFGoodrich Motorsport Australia Off Road Championship is the Can-Am Loveday 400 in Loveday, South Australia on 29 July – 1 August. 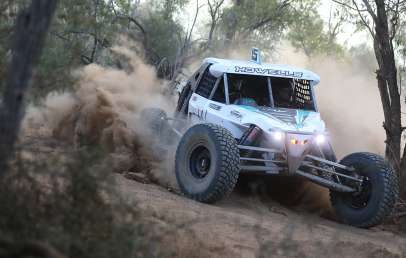