Another AORC record as Loveday hits 79

The finalised entry list for this month’s Can-Am Loveday 400 has been released with a record-breaking 79 crews to contest the South Australian event.

With the previous record sat at 40 crews, Loveday’s doubled tally makes it an all-time high for the event, making it the third BFGoodrich Motorsport Australia Off Road Championship (AORC) round to do that in 2022.

This month’s running of Loveday will be the first time it has run under the AORC banner, with plenty of big names entering at the last minute.

The highest profile drivers to squeeze in their entry ahead of the Friday night deadline were the two Howells Motorsport entries of Ally Howells and AORC event winner Josh Howells.

In what has been a miraculous recovery from the team, Josh’s entry to Loveday comes as a bit of a surprise, considering the tight turnaround after the Tatts Finke Desert Race and the significant damage sustained from his frustrating DNF.

There are plenty of local crews spread across the many classes, including 2019 AORC runner-up Roydn Bailey, who is now running in a Pro Buggy, Luke Erceg and a multiple time winner of Loveday at state level, Aaron Haby.

Event organiser Tony Whateley was thrilled with the response from the AORC community.

“We are absolutely over the moon with how many crews have entered Loveday this year – especially since there was a small gap between this event and Finke last month,” Whateley said.

“We were expecting to get a good response this year now that we are a national round, but to hit 79 crews is incredible and a big thank you must go out to all the crews who are showing support.

“The AORC has grown substantially over the years and we’re really impressed with the professionalism of everyone who competes, so we are looking to continue that trend later this month.

“To supersede our previous big tally by almost double is just amazing and I am looking forward to having the best crews in Australia here at Loveday.”

While the majority of the healthy 79-car field are entered in solely in the AORC, a number of crews will cross enter in the Motorsport Australia South Australia Off Road Championship, while 10 crews will compete in the state championship.

Spectators will be able to attend the event with tickets available for purchase at the gate, while fans unable to make it will be able to watch the extended highlights on 7Plus and 7Mate in the weeks after. 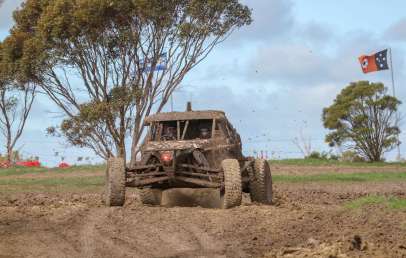